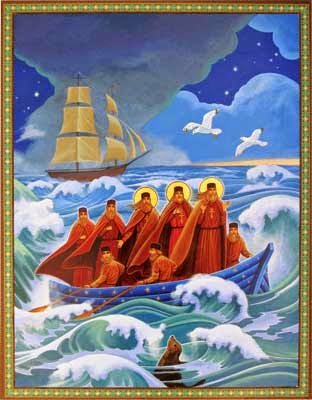 From Jerusalem to Europe to the United States… From East to West! The Westward journey of Christianity (in its Western form) is well-known. Christopher Columbus, the Mayflower, the Pilgrims. But there is also an East to even-more-East journey. From Jerusalem to Constantinople to Siberia and eventually Alaska and the Pacific Northwest…

In 1794, Orthodox Christian missionaries arrived in Alaska via Siberia from the Monastery of Valaam (modern-day Finland). Soon, the native tribes of Alaska (Aleut, Inuit, Tlingit) embraced this Orthodox Christianity from the ancient East. The southern-most outpost of the Alaskan mission was  Fort Ross, located on the coast between Humboldt and San Francisco.

In 1836, Fr John Innocent Veniaminov, one of the greatest missionaries in the history of Christianity, sailed from Sitka (where he was the pastor) to Fort Ross, right outside Humboldt Bay! From there, he went to San Francisco and met the Spanish Roman Catholic missionaries before sailing away to Hawaii and St Peterburg. It was North meets South as well as the encounter in America between Eastern and Western Christianity, between “Greek Oriental” and “Roman Catholic.”

In 1840, the same Innocent Veniaminov became the first bishop of the American Pacific North West, and ministered from Sitka until 1850… As it happens, Eureka was settled in 1850 and the entire North Coast was now being settled by an influx of immigrants coming from Western Europe.

Alaska became a US territory in 1867 but the Orthodox presence remained and increased with the arrival of immigrants from Greece, the Middle East and Eastern Europe.

Bishop Innocent (now known as Saint Innocent) himself died in 1879, 4 years before a beautiful church was built on F street in Eureka. Little did he know that it would eventually be named “St Innocent Orthodox Church” in remembrance of his tireless dedication to the Gospel of Jesus Christ as well as to the culture and welfare of the Native peoples of Alaska.

Icon above: St Herman, one of monks who came from Valaam in the 1700s.