Question: A friend of mine has been reading the Left Behind books that have all of this stuff about the “Rapture” in them. Is there really going to be a “Rapture” like these books talk about?

Answer: No. The “Rapture” refers to a passage in First Thessalonians 4, where Christians are “caught up” in the clouds to meet the Lord in the air.” Many Christians believe, and the Left Behind books promote, that this being “caught up” to meet the Lord will occur before the Great Tribulation sometime in the near future. Christians will simply vanish, meet Jesus somewhere in the air, and then return with Him to Heaven to await the end of time.

But notice, in verse 15, Paul says that “…we who are alive, who are left,” shall be caught up. This is a very important point to stress to rapture enthusiasts. Those who are “left” get caught up to meet the Lord. Keep that in mind as we look at these next couple of Scripture passages.

“One is taken, one is left” — the Rapture right? Jesus takes the Christians and leaves behind non-Christians!

And, if you need further proof of that, there’s a passage in Matthew 13 that pretty much seals the deal. Matthew 13:39-43, “…and the enemy who sowed them [the bad seed] is the devil; the harvest is the close of the age, and the reapers are angels. Just as the weeds are gathered and burned with fire, so will it be at the close of the age. The Son of man will send His angels and they will gather out of His kingdom all causes of sin and all evildoers, and throw them into the furnace of fire; there men will weep and gnash their teeth. Then the righteous will shine like the sun in the kingdom of their Father.”

So when Scripture says that “one is taken and one is left,” as it does in Luke 17 and Matthew 24, it is not talking about the Rapture, it is talking about the harvest at the close of the age. The ones who are taken, as it says in Matthew 13, are the evildoers. The angels have taken them and tossed them into the furnace of fire. So, the Left Behind books got it exactly 180 degrees wrong. The ones taken are not the good guys, they are the evildoers. The ones who are left behind are the ones who get to be caught up in the clouds to meet Jesus in the air at His Second Coming, when He will bring all of the angels and saints with Him and there will be a new Heaven and a new earth.

The real issue (not often clear in people’s minds) is not the idea of a rapture (Christians being taken up or ‘translated’ to be with the Lord) but rather the timing of the rapture in relation to the Lord’s second coming. The controversial (and quite obviously erroneous) idea is what is called the pre- or mid- tribulation rapture. The effect of this non-biblical idea is that at some point before “the end of the age” (before the Lord’s second coming), Christians would disappear from the world, leaving behind a lot of people who would then face the awful years of the tribulation. This is well expressed in the bumper sticker: 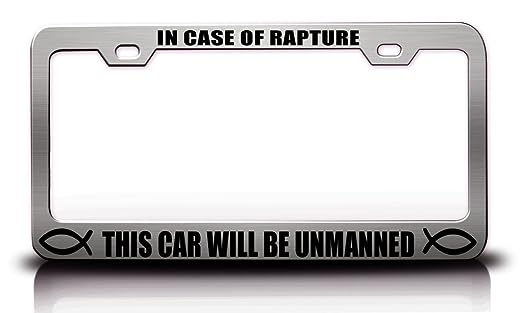 This idea, however, is neither biblical nor credible. The idea that not just many cars but also jetliners would be left without drivers and pilots is simply beyond credibility, and by no means called for by a sound reading of the Bible.

Perhaps the most compelling argument against the pre/mid tribulation rapture theory is that no Christian believed it or even knew about it for the first 1800 years of Christianity. When it comes to Christianity, the “faith once delivered to the saints” (Jude 1:3), there is simple rule: “if its new, it just can’t be true!”